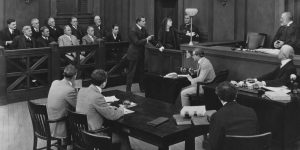 What is a jury trial? When does it take place?  Does it always take place?  Who decides if the case will be tried? Is jury trial a good option for a criminal defendant?

Jury trial (JT) is a trial, a process when a panel of 6 jurors (in a misdemeanor trial) and 12 jurors (in a felony trial) decides the facts and vote on a verdict of either guilty or not guilty.  The jury panel in a criminal case listens to the evidence presented during a trial, then decides what facts the evidence has established, and then the jury panel can draw inferences from those facts in order to form the basis for their decision.

The danger of a jury trial for the defendant is that nobody knows the verdict until the end. It is quite possible that the defendant can reject a deal from the prosecution, take the case to trial and lose. Possible that the outcome of a trial would be worse than the plea deal offered by the prosecution prior to trial. However, it is also possible that the defendant rejects the plea deal, takes this big risk, goes to trial, and is acquitted of all the charges. This is a much better outcome than pleading guilty and paying the price of a conviction that may have many consequences. The final decision of whether the matter will go to trial belongs to the defendant. An attorney will explain to his or her client all pros and cons of this very important decision.

Once the verdict is reached everyone will be asked to come back to the courtroom where the trial was taking place to listen to the jury’s verdict. The verdict can be, not guilty on all counts, or guilty on all counts, or split verdict with not guilty on some and guilty on other charges. The verdict sheet will be first shown to the judge who after reading it will return it back to the jury foreperson. Then the foreperson will read it then out loud for everyone in the courtroom.  Each lawyer, prosecutor, and defense can ask each juror to confirm that it is in fact their verdict.

If the verdict is not guilty, the judge will dismiss the jury and then will close the case, letting the defendant go home. If there was bail, it will be exonerated and the record of arrest and charges will be sealed as it never happened. The defendant will be reinstated to the same position as she/he was in prior to the arrest. It is a great feeling for the defense attorney to experience such a victory to hear these words “not guilty” from the jury or the court when his or her client is exonerated of all charges and can get his life back after the ordeal that the client had to go through. Hearing not guilty on all counts from the jury is the goal for the defense attorney who took this case to trial.  Depending on its complexity, a Jury Trial can last anywhere from 2 weeks to several months, every day from 9 to 5.

The accused in a criminal case must be present with his attorney in the courtroom during this time. Defense attorneys must be very well prepared for the trial. Depending on the complexity of the case it may take defense attorneys anywhere from several weeks to several months to prepare for trial. It is a very complex process. An attorney conducting a trial must be experienced and spend a lot of time preparing for every aspect of a trial because his client’s life depends on it. When we have trials in our firm, the entire firm works on it very hard. Attorneys trying a criminal case must be very well prepared for it, know all the facts of the case, know when and how to object, how to preclude certain evidence, and admit favorable evidence, know the applicable law, cross-examine witnesses, be ready to file motions during the trial and adapt to and deal with situations that occur at trial.

If you have a criminal matter and were offered a deal – plea bargain – by the prosecution but not sure if you should take it, please contact our firm for a second opinion. We can analyze it for you to determine whether you should take the case to trial as it may be the most important decision you have to make in your life.