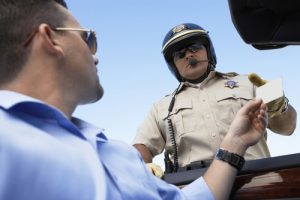 Suspended driver license or driving privilege means it will be taken away for a period of time before it is returned. Period of suspension depends on several factors including your prior driving history as well as ground for initial suspension.  You may also be required to pay a suspension termination fee. This suspension period can be definite (which has a beginning and end date) or indefinite, which does not end until you take the required action.

The driver gets a traffic ticket that she/he forgets to respond to on time.

Driver does not receive mail from DMV where he/she resides or simply does not open them or just ignores/forgets these letters. DMV will inform such driver that since driver failed to respond to a traffic ticket, her/his driver license or privilege will be suspended. The driver continues to disregard it and eventually forgets about that.  Please note that it is not a defense to state that    “DMV probably sent these letters to my old address where I no longer reside and do not get mail from there and I did not know it was suspended”. By law, each driver must inform DMV about his/her change of address within 10 days. The element of the offense here is ”knew” or “should have known”. Therefore, if the driver would have complied with the law, and would have updated his/her address on file with the DMV, such letters would have been received. (DMV usually sends several letters informing drivers about license suspension). It is important that DMV has always an updated driver’s mailing address on file. Many suspended license offense can be avoided if such important letters from DMV received and complied with by drivers.

Once driver fails to respond to such letters informing her/him that driver license or privilege will be suspended, in fact license gets suspended which prohibits driver from operating a motor vehicle. Driver forgets about it and continues to drive. Then driver gets pulled over for an unrelated violation and police officer, upon checking the status of license/privilege issues a criminal charge – Unclassified Misdemeanor (a crime)– Aggravated Unlicensed Operation in the 3rd degree – (aka driving with a suspended license) — VTL 511.1. Depending on number and dates of outstanding suspensions, such charge can be VTL 511.2 or even 511.3 as a felony.

Some people have a mistaken belief that NYS DMV cannot suspend their driver license if they do not have one in the State of New York. In fact, DMV can suspend driving privileges for the out-of-state drivers as well as driving privileges for the unlicensed people for failure to pay/answer tickets. Any person who ever receives a personal traffic ticket in NYS will have his own driving record abstract on file with NYS DMV despite having no driver license at all or having an out-of-state driver license.

Police Officer will (in most cases) issue summonses to the driver to appear in a criminal court of the county (or village/town – if village/town police) where the driver was operating a motor vehicle. Police have the authority to arrest a driver, take him/her into custody, hold driver until the driver will see a judge at arraignment which maybe the next day. There are many instances where it happens, with more detained cases being in NYC than Nassau or Suffolk counties.

Upon receiving such criminal summonses – VTL 511, drivers rush to DMV to pay/resolve outstanding suspension/tickets. However, they do it after the fact. In addition to doing this, they also must appear in a criminal court (or village/town court) to answer a newly received criminal charge of driving with a suspended license. Often there will be other traffic tickets issued in addition to VTL 511. Please note that it is not a defense to say “But I went to DMV and paid the ticket after Officer told me that my license is suspended, why do I need to come to criminal court?”  Driver must appear in Criminal court since on the date when this driver was pulled over and issued summonses, his/her driver license was suspended and the fact that it was cleared AFTER the fact does not exonerate the driver. It is a factor to consider in negotiating a resolution of the criminal matter. Before a resolution or reduction of a criminal charge can be negotiated, attorney for the driver must make sure that driver’s license was in fact suspended. Otherwise, it should be completely dismissed.

We offer free consultation on how we can get rid of criminal charges in court despite that driver was in fact driving with a suspended license on the date in question.

Attorney Advertising:  This information is designed for general information purposes only. The information presented here should not be construed to be legal advice, nor this information of lawyer/client relationship.  To obtain an analysis and advice about your specific situation, please contact our office to schedule your personal consultation